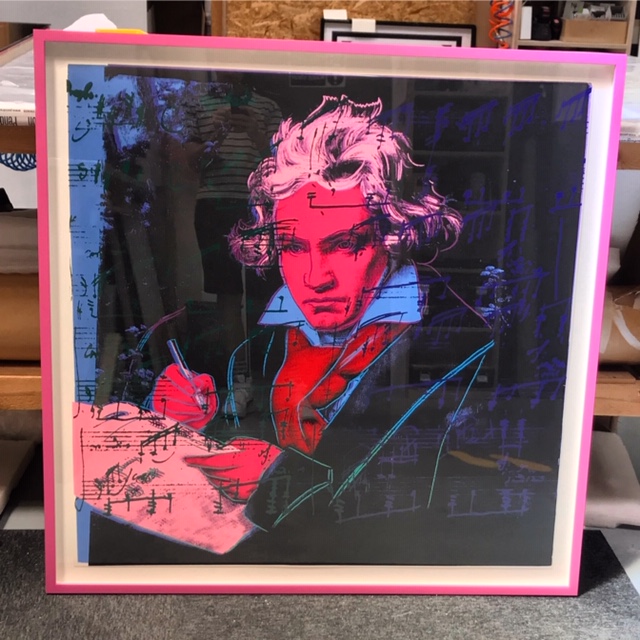 2020 is the year to celebrate the 250th Anniversary since the birth of Ludwig Van Beethoven.
‘Despite lockdowns and a pandemic, fans all over the world are celebrating the 250th anniversary of his birth with typical enthusiasm, hosting talks and digital concerts from Rotterdam to Denver. In March, performers with the Berlin State Opera took to their balconies to sing excerpts from his heroic Ninth Symphony. In May, officials eagerly reopened the Beethoven-Haus, his childhood home in the centre of Bonn.’Culture-bbc.com
And of course Andy Warhol’s work is defined by his obsession with fame and the portrayal of icons in popular culture, from his earliest screen prints of Elizabeth Taylor and Marilyn Monroe to the later representations of Vladimir Lenin. It is no surprise, therefore, that Warhol chose to portray Ludwig van Beethoven, who has been widely regarded as one of the most celebrated composers of all time.
The framing shows how effective a daring choice can be and the pink paint finish really makes the whole print and frame POP, just as it should.

We make frames, perspex boxes and creative display solutions for a range of budgets. We’d be delighted to give you an estimate as guidance. Just complete this form and we’ll get back to you quickly (that’s a person, not a robot, so please give us a short while).

We look forward to meeting you soon. Tell us a few details about yourself and we’ll get straight back to you.

We welcome confidential feedback, so we can further enhance what we do and offer.